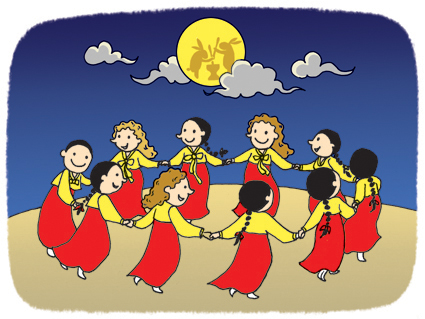 This Wednesday-Friday marks the Korean holiday of Chuseok. Chuseok is the Korean Thanksgiving  holiday and celebrated every September. It’s a three-day holiday celebrated from the 18-20 of the month, with the actual Chuseok day being the 19th. During this holiday, families return to their ancestral hometowns and gather together – young and old.

Koreans celebrate the fall harvest, since the Korean people have been mostly agrarian throughout its history. According to the Korean Tourism Website:

Although the exact origin of Chuseok is unclear, the tradition may be found at ancient religious practices that centered around the moon. The sun’s presence was considered routine, but the full moon that came once a month was considered a special and meaningful event. Therefore, harvest festivities took place on the day of the bright, full moon or August 15 on the lunar calendar system.

On the morning of Chuseok day, the women in the family (wives, daughters, grandmothers) spend their time preparing the different traditional foods.

Once the foods are prepared, a memorial service called Charye is performed. Once the memorial ceremony is finished, the family visits their ancestral graves and engage in a ritual where the weeds around the graves are cleared, this is called Beolcho. From the Korean tourism website:

Also, Koreans make a liquor called soju (소주), which is made from distilled rice.

On Chuseok day, Koreans typically wear traditional clothing. For the women, they wear a dress called a hanbok (한복) or a special dress for holidays called a chuseokbim (추석빔).  Men wear a suit called a yanbok (양복).

The hanbok modeled by Karen. 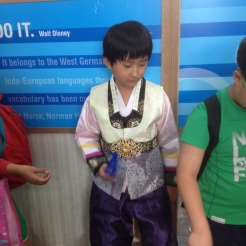 The yangbok modeled by one of my students, William.

This holiday is one the important holidays in Korea, along with Seollal (설날- Chinese New Year’s Day) and Dano (the fifth day of the fifth month of the Lunar New Year).